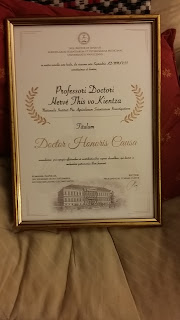 Hervé This, vo Kientza (Kientza, born 5th June 1955), chemical physicist at INRA and Professor at AgroParisTech, is now (mainly) the Director of the AgroParisTech-INRA International Centre for Molecular Gastronomy, in Paris.


After studying at the Ecole Supérieure de Physique et de Chimie de Paris (ESPCI ParisTech, 1976-1980) but also at University Paris IV (modern litterature), he began his career in 1980 at the scientific journal Pour la Science, the French Edition of Scientific American, as an editor of the journal and of scientific books at the Belin Publishing Company.
At about the same time (16 March 1980), he began his research in Molecular Gastronomy in the personal laboratory that he had at home since the age of 6.
As early as 1980, he also proposed also a modernization of culinary activities (after 1999, this was called “Molecular Cooking” and “Molecular Cuisine” respectively for the technique and the style).
For years, he did his research alone while pursuing is scientific communication activity, as a deputy editor, then the editor of Pour la Science. For all these years, he was also collaborating to the radio channel France Culture, and was Scientific Director of the scientific TV series Archimedes (Arte) and Pi=3.14 (France 5).

In 1986 he met the English Hungarian-born physicist Nicholas Kurti (1908-1998), with which he created the scientific discipline called Molecular Gastronomy in 1988. Together, they created the International Workshops on Molecular and Physical Gastronomy in the Ettore Majorana Centre (Erice, Sicily).
He began giving invited seminars of Molecular Gastronomy, the first being in the physics department of the Ecole normale supérieure de Paris, France.

In 1995, he was asked by the French Academy of Sciences,to defend a PhD on La gastronomie moléculaire et physique, which he did in front of a jury including Jean-Marie Lehn (Nobel Prize 1987), Pierre Gilles de Gennes (Nobel Prize 1999), Pierre Potier and others.

In 1996, he was invited by Jean-Marie Lehn to conduct his research at the Laboratoire de Chimie des Interactions Moléculaires, of the Collège de France.

In 2000, he was asked by Guy Ourisson, then president of the Academy of sciences, to defend his habilitation to head research, which he did at the University Paris Sud -Orsay, in front of Etienne Guyon, then head of the Ecole Normale Supérieure, Xavier Chapuisat, the president of the university, Guy Ourisson, Alain Fuchs (now president of CNRS) and the French chef Pierre Gagnaire.
He moved to this lab at the Collège de France full time in 2000, being appointed by INRA.
In April 2006, while he was moving his lab to AgroParisTech, he was given a professorship at the University, and the French Academy of Sciences asked him to create Fondation Science & Culture Alimentaire, of which he was appointed the Scientific Director.
And in 2014, he was asked by Inra and AgroParisTech to create the AgroParisTech-Inra International Centre for Molecular Gastronomy.
Since 2000, Hervé This has been frequently requested by French Ministries to develop projects: new curricula for teaching culinary practices, new ways of teaching science in schools and in colleges, creating an Advanced Studies Institute for Gastronomy… Member of many committes, he runs monthly Seminars of molecular gastronomy and Courses on Molecular Gastronomy, delivering many lectures all around the world. He writes regular columns in journals, and he is the author of many books. Since 2016, he is the creator and editor of the scientific journal N3AF of the French Academy of Agriculture.

Honorary member of various culinary Academies, president of the Food Section of the Académie d’Agriculture de France; Member of the Académie de Stanislas; Member of the Royal Academy of Sciences, Arts and Letters of Belgium; Member of the European Academy of Science, Arts and Letters, he is the recipient of many awards such as the Franqui professorship (University of Liège), the Grand Prix des Sciences de l’Aliment by the International Association of Gastronomy, and his was received as Doctor Honoris Causa of the University of agronomical and veterinary sciences of Cluj-Napoca (Roumania) in 2017. Hervé This is Officer in the Ordre des Arts et Lettres, Officer in the Ordre du Mérite Agricole, Officer in the Ordre des Palmes Académiques, and Knight in the Order of the Légion d’Honneur. He wrote 18 books, many of them being translated in all the major language of the world.
Right now, while his passion and main activity is still molecular gastronomy, he is also actively involved in the promotion of Note by Note Cuisine, as the next big global culinary trend.