This morning, I should not answer, because indeed the answers are already given, but I found new ways of answering.
The questions are in italics.


What does molecular gastronomy mean to you as a scientist, or as a chef if you cook?

Molecular gastronomy should mean someone to me in particular. It means the same for everybody: the scientific discipline looking for the mechanisms of phenomena occurring during culinary processes. Nothing else.
The question is as strange as if I was asked: what does a cat mean for you, as a scientist, or as a chef if you cook.
And by the way, even when I cook (daily, at home, for all evening dinners plus meals of the week ends), I am not a chef, but I remain a scientist, and a scientist that cooks. The same when I am walking: I remain a scientist, and a scientist that walks.

How was your relationship with Nicholas Kurti( Kürti Miklós)?

It was a "love affair", immediate friendship that began as soon as we spoke on the phone, in 1986. After some seconds, he decided to come to Paris and see me, and we had this wonderful meal together, when we shared a "poule au vin jaune et aux morilles", at Maitre Paul, rue Racine, in the Quartier Latin of Paris. Immediately, we decided that we could share our results, thoughts, experiments... He was 50 years older than me, but we behaved as friends, and he was certainly not my tutor. Only a friend.
We shared everything: when I was invited as honoris causa in a university, I asked him to be along, and when he was proposed to write a text, we did it both (generally, I was writing the first draft, and he was improving it).
We did everything in a wonderful harmony, experiments on soufflés, on vinegar, organizing the Erice workshops... We spoke on the phone daily, and when I was making an experiment in Paris, he repeated it in London. He was a very good physicist, and I learned a lot from him in this regard, whereas he got much from me in chemistry, of which he did not know much.

I am not sure I understood this that’s why I am asking it.

Yes, but you make a load on me. Please read more carefully and use Google translate (or another one), because the explanations are clearly given.


So is Note by Note for example when you deconstruct two material to their chemical structure and then construct it with another material with the same structure?


Or how is this going? I have read that for example the garlic and the coffee has the same structure so they can be combined to invent a new dish?

By structure, you perhaps mean "composition". And no, garlic does not have the same chemical composition as coffee... otherwise they would be the same ! Please, also avoid the "I have read", and give precise references. By the way, only have good readings (can you recognize them?).
Finally, what you probably read is that coffee and garlic have one or more compounds in common, so that they would "pair". But this is a bad theory, that has nothing scientific as cooking is art, not a question of science.


I am sorry If I misunderstood this whole thing, it is a little hard for me to learn and write about such a hard theme in not my mother language.

Sorry for you, but I cannot help in this regard.


Can I do fruit caviars from agar-agar? Or is it just like gelatine but the vegetable matter of it?

You probably means "alginate pearls" with a liquid core, and for this, you need... sodium alginate. But it's true that I showed decades ago how to make it with gelatin: my solution is displayed on the internet site of Pierre Gagnaire. And I guess that I could also find a solution with agar-agar.

How can we invent totally new dishes with Note by Note?

Look at any recipe of the International Contest, or read my book Note by Note Cooking, at Columbia University Press. 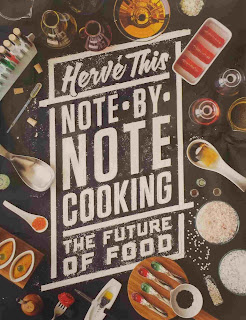 Do you think that molecular gastronomy will be the future or not because it needs some hardly available items for it, or like liquid nitrogen. So will it be available in a normal kitchen or just for the best Restaurants?

Do you teach molecular gastronomy?
Yes,  in a lot of contexts.
- in the Erasmus Mundus Plus Master Programme "Food Innovation and Product Design"
- in the IPP Master Programme of AgroParisTech
- at the Ecoles des Mines de Paris
- at AgroParisTech, in the context of the Courses of Molecular Gastronomy
- and others

Posted by Herve This vo Kientza at 10:11